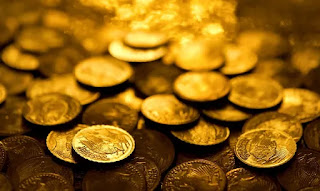 Collectors and investors appear to have flocked to gold coins as a safe haven buy amid stock market turbulence caused by coronavirus, with some at a behind closed doors auction this week selling for triple their estimate.

More than 500 lots of coins dating from the Iron Age all the way through to 2008 went under the hammer at auction house Spink, selling from anything from £30 to £65,000.

While the auction house told This is Money its estimates did tend to be more conservative to encourage bidding, many of the highest-selling lots dramatically exceeded their estimates in the online-only auction of more than 500 bidders.

It suggests investors are once again looking to the commodity, which reached an all-time sterling high of £1,388.55 per oz on the day of the auction.

It is often seen as a safe port which goes up in value when other assets like stocks fall.

While the recent boom in the strength of the dollar means that gold is not at an all-time high in that currency, it is at an all-time sterling high of £1,388.55 per oz.

However it is now riding high, and investors can't get enough.