Now that United Kingdom has left the European Union 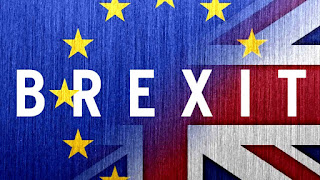 Brexit has happened. After 1,316 days of political turmoil, the UK now stands alone as the first nation to have ever left the European Union.

It has ended the careers of two Prime Ministers and left the very future of the United Kingdom in question. Scotland's case for independence is becoming harder to ignore while Britain's perceived selling out of Northern Ireland has played into the hands of those wishing to see Irish unification.
That's just the politics: Britain's economic future and place in the world have not been this uncertain since the end of the World War II.

Speaking to the nation an hour before Brexit finally happened, Prime Minister Boris Johnson acknowledged that the country was divided: "For many people this is an astonishing moment of hope, a moment they thought would never come. And there are many of course who feel a sense of anxiety and loss ... I understand all those feelings, and our job as the government -- my job -- is to bring this country together now and take us forward."

The key question that needs answering in the next 11 months: Will the UK stick with its European neighbors and their multilateral view of the world? Or will it drift across the Atlantic and team up with an increasingly confrontational American foreign policy?
Why 11 months? Because, according to the deal Britain signed with the EU, this Brexit transition period ends on December 31, and whatever deal the two parties have reached on their future relationship -- if any -- kicks in.

Britain has been debating the pros and cons of membership in a European community of nations almost from the moment the idea was broached. It held its first referendum on membership in what was then called the European Economic Community in 1975, less than three years after it joined. At the time, 67 percent of voters supported staying in the bloc.

But that was hardly the end of the debate. 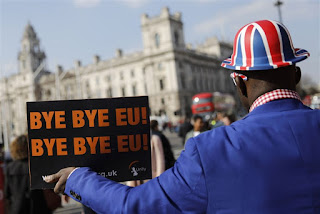 In 2013, Prime Minister David Cameron promised a national referendum on European Union membership with the idea of settling the question once and for all. The options offered to voters were broad and vague — Remain or Leave — and Mr. Cameron was convinced that Remain would win handily.

That turned out to be a serious miscalculation.

As Britons went to the polls on June 23, 2016, a refugee crisis had made migration a subject of political rage across Europe. Meanwhile, the Leave campaign was hit with accusations that it had relied on lies and that it had broken election laws.

In the end, a withdrawal from the bloc, however ill-defined, emerged with the support of 52 percent of voters. 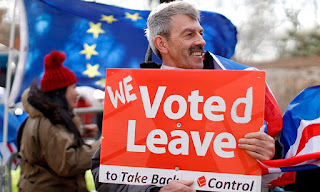 Brexit advocates had saved for another day the tangled question of what should come next. Even now that Britain has settled the terms of its departure, it remains unclear what sort of relationship with the European Union it wants for the future, a matter that could prove just as divisive as the debate over withdrawal.

Europe is Britain’s most important export market and its biggest source of foreign investment, while membership in the bloc has helped London cement its position as a global financial center.

With some regularity, major businesses have announced that they are leaving Britain because of Brexit, or have at least threatened to do so. The list of companies thinking about relocating includes Airbus, which employs 14,000 people and supports more than 100,000 other jobs.

The government has projected that in 15 years, the country’s economy would be 4 percent to 9 percent smaller if Britain left the European Union than if it remained, depending on how it leaves.

Much as Jan. 31 marks a symbolic milestone, it is merely the beginning of a potentially more volatile chapter of the turbulent divorce, in which political and business leaders jockey over what sort of Brexit will come to pass.

Every path holds risks for Mr. Johnson, all the more so after an election in which he was buoyed by voters in ex-Labour heartland seats in northern and central England who stand to suffer from trading barriers with Europe.