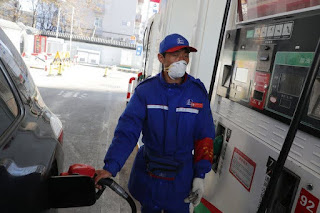 Crude oil has crashed into yet another bear market on fears that the coronavirus outbreak will destroy demand in China, the world's largest crude importer.

US oil tumbled another 2.8% on Monday and briefly broke below $50 a barrel for the first time since January 2019. Crude finished at $50.11 a barrel, leaving it down nearly 21% from the recent closing high of $63.27 a barrel on January 6. A bear market is frequently defined as a drop of more than 20% from previous highs.

Energy markets have been clobbered by the rapid spread of the coronavirus, which has killed more than 360 people and infected more than 17,000 around the world. The virus has also caused countless flight cancellations and brought parts of the Chinese economy to a standstill.

"There's a lot of fear in the market. And a lot of forced liquidations," said Ryan Fitzmaurice, energy strategist at Rabobank.

Oil prices had been on the rise to start the year as investors bet the US-China Phase One trade deal would revive the global economy. Crude also momentarily spiked on surging tensions between the United States and Iran.

The notoriously boom-to-bust oil market is no stranger to bear markets. Yet even by oil's standards, these downdrafts are occurring more frequently. Crude has now plunged into four bear markets just since the start of 2017. That has helped lead to a dreadful performance for energy stocks.

Yet unlike these prior plunges, this bear market is being driven by diminished demand, not excess supply.

History shows it can take the energy market time to rebound from health shocks.

It took US oil prices more than 10 months to recover in 2003 from the SARS crisis, according to CFRA Research.