Okupe’s Prediction And The APC - by Niran Adedokun 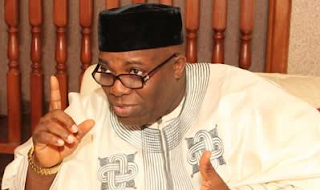 When the Senior Special Assistant, Public Affairs to former President Goodluck Jonathan, Dr Doyin Okupe, swore that the All Progressives Congress would not last one year, many Nigerians went after him in anger.

Maybe Okupe sowed some seeds that justify what he got, but the medic turned politician saw something that most of us did not pause to consider. In our anger, we condemned the message because of the messenger.


Experienced politician that he is, having been in the top echelons of a national party as far as 24 years back, Okupe must have seen the congregation of politicians from every shade of opinion and interest coming together in a hurry and concluded that at some point, there would, without fail, be a conflict of interests, which could precipitate a conflagration that the APC may be unable to weather through.

Those who were in a hurry to condemn Okupe must be having a rethink now. Reports following the elections of leaders of the National Assembly indicate that combatants in the APC are determined to snuff life out of the in-house opponent without regard to what that may do to the party and a country that is haemorrhaging.

Now, how that surprises anyone still baffles me. If you understand that no idea, principle or person is permanent in the contemplation of the average politician, you will not be miffed to see men, who smiled at each other last night, draw the daggers in the morning.

And this is not just about Nigeria. The flip-flop of politicians in more advanced democracies seems a little else obvious because while Nigeria adorns mortals in messianic garb, institutions are stronger in those countries. Which is why, whether it is a Barack Obama, a George Bush or a Bill Clinton, there are institutions which deal with malfeasance and beat a leader into line.

Here, we rely on human beings to save us from human beings. As a result, only a Muhammadu Buhari is believed to be able to fight corruption, only an Attahiru Jega is able to organise free and fair elections. Now that his tenure is over, we are at a loss about sustaining the credibility that attended the 2015 elections.

Rather than build the Independent National Electoral Commission into a reputable body where anyone can function with limited opportunity for manipulations, we prefer to seek another Jega or his clone. We would rather depend on strong individuals than on strong institutions. But I digress.

Politicians do not have to be nice. They are not clerics, bound by some ecclesiastic charter of charity to which they are eternally committed to. If something suits the purpose of the politician today, he is all for it but everything changes the moment that fancy object outlives its purpose.

For instance, why did President Barack Obama stand so solidly against gay marriage during his campaign in 2008 but made a total turnabout in 2012 with a recent claim that he “evolved” on the issue?

Obama’s volte face is so absolute that his administration held the passage of the anti-gay marriage bill against Nigeria! That is the way of the politician, he is not even sure of his own ways until some exigency presents itself. No matter what they say, ambition drives all politicians. As someone once alluded, only statesmen think about the future, politicians are too engrossed about winning the next election and the game for 2019 has started in earnest.

The attempt to impose leaders on the National Assembly and the move that blindsided those who were bent on imposition is all politics and we must come to terms with the fact that the political field does not have the sanctity of a religious place. In any case, every Nigerian politician of clout is guilty of some measure of imperialism or treachery in their areas of influence, so it would be hard for anyone to cast a first stone.

This is why the current travails of the APC which resulted from the emergence of Senator Bukola Saraki and Yakubu Dogara as the Senate President and Speaker, House of Representatives, respectively, against the wishes of their party could be fatal to the birthing of the change that Nigerians envisaged when they voted for the APC at the last elections. And when that happens, there would be no one to blame other than the party itself.

What I am saying is that only the APC is able to help us move on from the feeling of uncertainty that has gripped many Nigerians since the emergence of people, not sanctioned by the party as leaders of the National Assembly.

Unfortunately, the APC does not seem be in control of the situation. Although the Chairman of the party, Chief John Odigie-Oyegun, indicated that the party had no choice but to accept the elections of Saraki and Dogara, the fact that Tuesday’s first caucus meeting of the APC senators nearly resulted in fisticuffs is an indication that all is not yet well with the party.

Those who think they got bloodied by the elections early this month are likely lurking in the corner looking for an opportunity to take their pound. I smell that someone is cooking up plans to serve those who carried the day the cold dish of revenge, some banana peel of sorts.

This is where it gets scary. If anyone in the APC, no matter whose interest they represent, strikes back at Saraki and Dogara for any reason, the APC would be on its way to fulfilling the doom predicted by Okupe. And any disaster on the APC will tell negatively on Nigeria and may put paid to the promise of change that they made. And there would be nobody to blame other than the APC itself and its seeming unpreparedness to govern fairly.

Although there is a dearth of statesmanship on the Nigerian political landscape currently, President Buhari being the only one I see from where I stand, there is an inexhaustible list of politicians in the APC who qualify to be in the hall of statesmen, only if they would bury their personal ambitions and consider the future of the country.

For instance, penultimate weekend, Saturday Punch reported a subtle battle for the soul of the party between Alhaji Abubakar Atiku and Asiwaju Bola Ahmed Tinubu. Now, each of these men has considerable following with which they can pull the plug at any time and so, a prompt cessation of this silent war, which has not been refuted by any of the parties, would be important to saving the party and helping it deliver on its promises to Nigeria.

Before Atiku, Tinubu and their supporters push the people off the bridge incurring democratic fatalities, they need to imbibe lessons on the role of kingmakers from American politician and Catholic influencer, James Farley, who orchestrated the electoral success of politicians including Franklin D. Roosevelt without causing dislocations in the American political system.

What we ask of these gladiators is that if only for this one time in their career, they should put the interest of Nigeria first. I worry that unless President Buhari gets the full cooperation of his party, such that some far-reaching reforms can happen in Nigeria within the next four years, the trouble that we thought were over as a result of the peace that followed the 2015 elections will revisit us.

They must consider the interest of millions of Nigerians who have no food to eat, who die from common ailments that most of the world does not talk about again, of hundreds of thousands of entrepreneurs sweating under the harsh business conditions in the country, of the power and energy crises and a myriad of other problems that make life feel like hell for Nigerians.