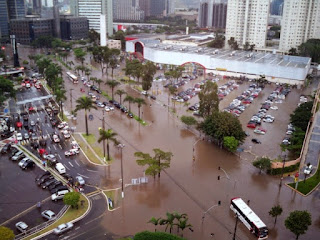 Persistent rains in Lagos, especially in the last two days, have brought woes to its residents as they battle the impact of floods in the coastal city-state.

Whilst the rains lasted, cars were stuck in gutters, houses submerged and buildings with weak foundations brought down.

Although no life was lost in the resultant floods, residents yesterday lamented the untold hardships the rains had inflicted on them.


Following the two days of downpour, a number of roads were submerged, with areas like the Apapa end of the Oshodi Expressway was almost cut off by the flood.

Checks revealed that aside from submerged homes and commercial buildings, the floods also caused serious gridlocks that lasted for hours.

Also affected were pedestrians, who were stranded at different bus stops due to the inability of commercial buses and taxis to navigate the water logged roads.

Also affected were some highbrow areas like Victoria Garden City (VGC), Lekki, Ikoyi and even some parts of Victoria Island.

Over the weekend, the persistent rainfall brought down a building at No 14, Ijaye Street, Alhaja One Bus Stop, Agege.

The house, which was reportedly constructed over 50 years ago, fell like a pack of badly stacked cards after the rainwater seeped into the foundation.

Already, the Lagos State Building Control Agency (LASBCA) has marked about 30 houses on the street for integrity tests.

Farinloye said the markings were for necessary advice and action to preserving the remaining houses on the street.

He however said the youths in the area had fought off the government agencies in a bid to prevent them from marking their buildings for demolition.

Farinloye implored motorists and Lagosians in general to be careful and take precautionary measures once it rains, especially when the downpour is heavy. 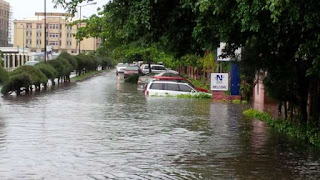