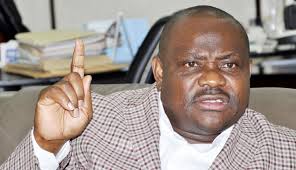 Rivers State Governor, Nyesom Wike, has declared that the state judiciary would have financial autonomy, so that it could work independently without being muscled by the executive.


He assured the people that he would never starve the judiciary of funds as a tool for arm twisting the judiciary, noting that the independence of the Judiciary was necessary for the smooth running of government.

Wike however took a swipe at the Bench and lawyers in the state for the roles they played in the crisis in the state judiciary, stating that if they had collectively taken a stand, the state would have been saved the pains of the protracted closure of the judiciary.

He said the Bench was divided during the crisis, when they were supposed to be united to fight the destruction of the judiciary.


Wike also expressed disappointment with what he described as the lackadaisical attitude of the Nigerian Bar Association (NBA) for failing to defend the legal profession in the face of attacks from a desperate administration seeking self-preservation.

His words: “As a lawyer, I am highly disappointed by the action of the NBA. Something that you know is wrong, but every one kept quiet.

“The actions that the NBA is taking now are belated. Suspending the former attorney general is coming late in the day. They failed to speak up when everything was going wrong. We got to that level of decadence because NBA failed to act.”


The governor said he would always follow due process in appointing judicial officers, stating that he would never make appointments on the premise of self-preservation.

He said, “If I believe in self-preservation, I would have appointed my wife acting chief judge and the second in line as acting president, customary court of appeal. But I am a person who believes in due process. All through my leadership, we will follow due process in all appointments and actions.”


In her response, the newly sworn-in acting Chief Judge, Justice Daisy Okocha, stated that there would be zero-tolerance for corruption under her leadership.

She commended the governor for working towards the financial autonomy of the judiciary and pledged to ensure the revival of the state judiciary.