As The Honeymoon With Buhari Ends - by Ololade Ajekigbe 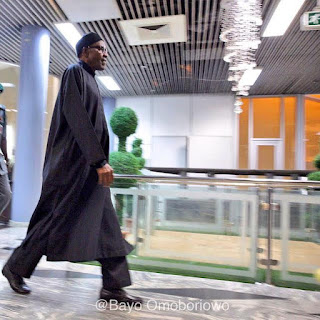 When Muhammadu Buhari was declared winner of the presidential election on Wednesday, April 1, 2015, the streets were jubilant, social media was agog with the news, and a good number of Nigerians basked in the euphoria of the new wave of hope and optimism in the air.

Not a few could wait for him to take over the reins of leadership of the most populous country in Africa. It almost appeared as though May 29 would never come as the days dragged by. But alas! It did! And now we have a new Sheriff in town who shoulders the hopes and expectations of over 170 million people.


Buhari’s dream of becoming the one who would direct the affairs of Nigeria in a democratic dispensation finally came true after three previous failed attempts. He is now the President and Commander-in-Chief of the Armed Forces of the Federal Republic of Nigeria. It is a fact. A reality. And with this reality must come the realisation that now that he has taken over the mantle of leadership, the term “change” which was popularised during the campaign period must evolve from being a mere slogan that was chanted as an idealistic or notional idea to an actuality! In other words, Nigerians are not going to be keen on listening to excuses or “stories that touch the heart” about how difficult it is going to be to get the job done. The average Chike, Bola and Hassan on the street just want a better life in all ramifications.

It was therefore refreshing to listen to the words from the well articulated inaugural speech of the President which highlighted the immediate and long term challenges and goals of his administration. Perhaps, the most heart-warming part of the speech apart from the assertion by Mr President that he was going to be a man for all and not serve the interest of a few, was the pronouncement that the command centre of the military would be moved to Maiduguri, the capital of Borno State, as soon as possible, in order to give the fight against insurgency in the North-East part of the country the much needed bite. Many have cheered the news as a step in the right direction.

President Buhari’s all inclusive speech no doubt inspires hope in the populace. He rightly zeroed in on insecurity, pervasive corruption, as well as the current shameful fuel and power situation of the country as the immediate priority of his government. For all intents and purposes, Mr President appears ready to roll up his sleeves and get his hands dirty. Which is a good thing as Nigerians are going to be hounding him very soon. Apart from the fact that patience has never been our forte as a people, this anticipated new lease of life has been a long time coming. The journey from getting the Temporary Voter Cards four years ago, to the scramble and tedious process of obtaining the Permanent Voter Cards, to the endless queues in the sun and rain on Election Day to ensure that their votes counted amidst several hitches, coupled with the fact that Nigerians have long since been jaded about the state of affairs of the nation have all contributed to the firm resolve that never again would the people allow themselves to be taken for granted by any government.

One can hardly blame anyone who’s impatient for the new administration to prove its mettle. Already, there is an ongoing controversy over the asset declaration of the President and the Vice-President, Prof. Yemi Osinbajo, especially now that the Code of Conduct Bureau has said it is not within its powers to declare their assets publicly, stating that the Freedom of Information Act could not override the provisions of the Nigerian constitution, and as such the National Assembly would need to amend the law before the Bureau could provide such information to the media. This must be addressed quickly by the way of the President making the details of his assets available to Nigerians in line with his campaign promises and encouraging his deputy and indeed all his appointees to do the same if they are not to be seen as breaching the social contract they made with Nigerians during the electioneering. This matter, if not well handled, may fan the embers of distrust in a young government all too soon…an albatross that Buhari doesn’t need.

Recently, there were four Boko Haram attacks in 48 hours, a move which clearly indicates that the deadly sect spent considerable time planning a response to the change in government, just in case anyone erroneously believed it had been subdued. The President and his deputy must realise that the honeymoon is over, work must begin in earnest and Nigerians will be monitoring their every move. Gone are the days where the majority of the people were unconcerned about politics and governance. The level of participation in this year’s polls is a pointer to the reality that people are now very interested in who governs them and how they are governed, particularly with the influence of social media in the scheme of things.

I am of the opinion that Nigerians need to be more patient with the new administration considering the enormity of the tasks before it. But I’m sure President Buhari had a good idea of what he was getting into when he applied for the job. Now he has it, and must prove to Nigerians that he deserved their vote in the shortest possible time. Nigerians must not regret keeping faith with the Buhari/Osinbajo ticket. The honeymoon is over Mr President. The honeymoon is over.
Labels: Muhammadu Buhari Must Read