Another ritualists' den uncovered in Ibadan 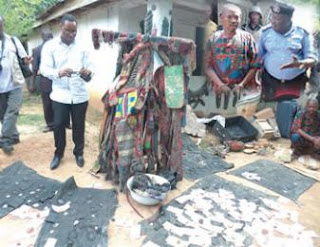 The serenity of Badeku community in Ona Ara Local Government was broken on Sunday, May 31, when the Anti-Kidnapping Squad of the Oyo State Police Command stormed Isase village in the community and burst a suspected kidnappers’ den, arresting a 43-year-old suspect, Ismail Adesina.


The den had different carved images similar to those that had been discovered in different kidnappers’/ritualists’ den in the South West part of Nigeria, and were reportedly being used to deceive victims into believing that they were dealing with genuine native doctors.

Briefing journalists on the discovery at the crime scene on Monday, the Commissioner of Police in Oyo State, CP Muhammad Musa Katsina, described the discovery as “another basket of illegality and a multi-purpose den that accommodates all manners of crime, from kidnapping to armed robbery and money-doubling.”

Katsina added that the arrest, led by the Officer-in-Charge, Olawole Ayoola, was as a result of weeks of painstaking intelligence gathering.

The police commissioner stated that a principal suspect, simply identified as Oji, was on the run but issued a note of warning that he would still come back to face the wrath of the law as he would not be able to evade arrest forever.

Katsina also went spiritual by appealing to members of the public to be wary of seeking powers outside God, as He is the only sustainer and nourisher.

The arrested suspect, who said he had been a fraudster for about five years, disclosed that he was working with one Oji, while other syndicate members, who owned the vehicles found at the scene, used to bring ‘customers’ for them.

He said that the total number of people who had fallen victims to them were five.