"I am Mourinho's rival, not his friend" - Brendan Rodgers 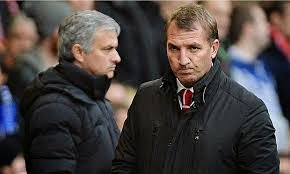 Brendan Rodgers has admitted the fierce rivalry between Liverpool and Chelsea means he and Jose Mourinho can no longer be close friends.

The teams clash at Anfield on Tuesday night in the first leg of the Capital One Cup semi-final with a place at Wembley at stake.

And though Chelsea manager Mourinho has tried to make peace by telling the London club’s fans to stop taunting Steven Gerrard, Rodgers is equally determined to be the man who stops his old boss achieving a clean sweep of all four competitions.

Mourinho helped Rodgers on his career path by giving him a job at Chelsea in 2004, and then advised him to take the role at Anfield when he was approached by Fenway Sports Group in 2012.

But the Liverpool manager admits that while he has ‘total respect’ for Mourinho, they no longer talk as frequently as they once did.

He said: ‘I have a huge respect for him. He is a wonderful man and coach. But you are so engrossed in your own work, you don’t communicate as much, you don’t have the conversations you had before and, ultimately, you could be a rival. The opportunity to work with him in that period of three and a bit years was invaluable to me.

‘Hopefully, in some ways, I helped him as well because we had a lot of communication.’

Chelsea are chasing a clean sweep and while this might be the least prestigious of the trophies they can win, Rodgers has no doubt they will be going full throttle for victory. So too, though, will Liverpool.

‘I know Jose well and I know again it’s a competition that is the first trophy you can win, and they will be very keen to put a trophy in the cabinet, especially having had nothing last year,’ said Rodgers, who expects Steven Gerrard to be fit to return.

‘Maybe if it was another team or club it might be different, but knowing him and some of the other players and the mentality there, they will want to win the trophy.

‘We want to get that back again and hopefully we can do that this season.’

Popular posts from this blog

An amateur footage of the May 24 Nigeria Governors’ Forum election during which Rivers State Governor, Rotimi Amaechi, was reelected chairman after he defeated his only challenger, Jonah Jang of Plateau State 19 votes to 16 has emerged.

With his mobile phone, Governor Rauf Aregbesola of Osun captured most of the proceedings of an election that featured intense maneuvering from governors on a clear divide, either in support or against Governor Jonah Jang of Plateau state.

VIDEO AFTER THE BREAK

Jessica Alba Showcases Her Post-Pregnancy Figure In A Bright Bikini

Cash Warren couldn't keep his eyes off his wife of three-and-a-half years as they frolicked on the beach - and it's easy to see why.Jessica Alba wowed on in Cabo San Lucas, wearing a bright pink bikini as she enjoys a Mexican break with her family and friends.The actress only gave birth to her second daughter Haven four months ago but showed off her extremely toned stomach as she paddled in the warm water yesterday.

more pictures as you read on

Users have very little recourse to recover those funds, said Christine Duhaime, a lawyer and founder of the Digital Finance Institute…
Read more